Boom, Belgium – Tomorrowland, the world’s most international dance music festival, kicked off yesterday with a bang – several bangs, actually, all emanating from the Main Stage volcano, which alternately spewed mist, fire, and water. Attendees from over 214 countries proudly bore their national flags, wearing them as capes, hanging them from the VIP balconies, and waving them on poles, Les Miserables-style.

Because of that massively diversified crowd, and a high quotient of Europeans (for whom Belgium is a commuter flight rather than a Transatlantic one), Americans found themselves in a place they don’t normally occupy: the minority, both in the audience and on the festival’s 15 stages. Not a single American artist played the volcanic Main Stage yesterday, and of the 11 who played at all, most were within Dim Mak’s circus-style tent.

This is not an unusual situation as the EDM revolution wears on: On Friday night of Electric Daisy Carnival in Las Vegas this year, only one Main Stager, Porter Robinson, was from the U.S. And regardless of the artist’s nationality, the styles of music defining American EDM – Dutch house, tranced-out pop, angular hard beats – do not have their origins in the 50 states. Dutchman Hardwell dominated Ultra Music Festival and EDC this year, and is thought to be on-track for a big showing on DJMag’s Top 100 DJs poll. But last night at Tomorrowland, his set for an audience of his countrymen and neighbors had an energy, a familiarity, a total outright love and understanding that trumped any U.S. crowd’s well-meaning fist-pump.

It was significant, then, when Americans playing music native to America won over the Tomorrowland crowd in a big way, because sharing dancefloor movements might be the most significant cultural exchange there is. Steve Aoki’s onstage antics and tweaked-out beats packed his tent, but it was “festival trap” upstart Carnage who had the whole crew literally climbing the rafters for tracks like “Bang!” Trap might be greying in sped-up American time, but in Europe it still feels fresh. On the Jacked Stage (which incongruously occupied the hydrangea-draped Garden of Madness tent), former LMFAO member Redfoo played his group’s hits to an enthusiastic, if slightly bemused, crowd; the neon-clad DJ, joined onstage by his outlandish posse, rapped and riffed over “Sorry for Party Rocking” and more of-the-moment U.S. fare like Capital Cities’ “Safe and Sound.” 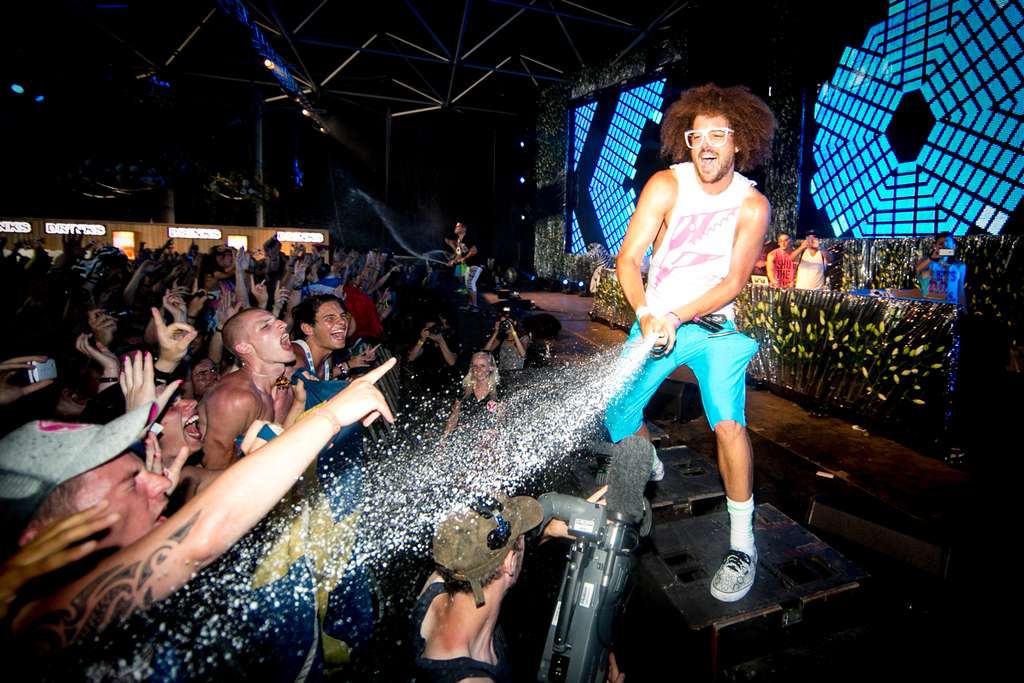 American voices did have a presence on the Main Stage. But with DJs using only the acapellas of tracks like Krewella’s “Alive” and Macklemore & Ryan Lewis’ “Can’t Hold Us,” the songs existed as pure pop fodder, sprucing up big-room EDM tunes. Which isn’t to say the tactic didn’t work: Tiesto created one of many hands-in-the-air moments with “Can’t Hold Us,” and Dimitri Vegas & Like Mike led a rowdy stomp/clap/sing-a-long to a bass-powered rework of “Otherside” by the Red Hot Chili Peppers.

On Tomorrowland Day 2, U.S.-born legends Derrick Carter, Mark Farina, DJ Sneak and Masters At Work will play house classics, celebrating a genre launched in the States, yet more aggressively embraced in Europe. In this case, the crowd might respond to the visitors more enthusiastically than the U.S. EDM crowd would.

At a certain point the conversation becomes moot, because if Tomorrowland shows us anything, it’s that dance music is the most international music genre, period. While separate subgenres might have different geographical markers, the power of the kick drum is universal. And every person here believes in it.