Boom, Belgium – Saturday at Tomorrowland could be divided into three segments: Pre-storm, mid-storm, and post-storm.

After grey skies and showers in the early afternoon, the sun broke over the festival grounds just in time for an early 3 p.m. Main Stage set from Zedd. Warm breezes prevailed throughout the day, before a few warning drops around 10 p.m. heralded the trouble to come. The tears became a waterfall mid-way through Avicii’s Main Stage set, right as he dropped the first strains of new worldwide hit “Wake Me Up!” Soon the mountain ridge surrounding the great volcano became a mudslide, and the buckets of rain turned sideways with the wind. Stages succumbed: Q Dance and Cocoon were shut down, as backstage areas became rivers. Shuttle buses temporarily stopped running, stranding many artists at the festival long after their sets (which yielded some serious artist lounge hangouts, as this snap of Tiesto, Carnage, and Martin Garrix shows).

Zedd: Zedd got the Main Stage party started right. His 3pm set was both a warm-up, setting the energy level for the performances to come, as well as a cool-down: Fans packed the front of the stage, taking refuge from the afternoon heat in the misty water emanating from the volcano. The German stayed true to his electro roots – Clarity tracks like “Fall Into The Sky” and “Codec” made appearances – while catering to the Main Stage sensibility with Calvin Harris’ “Sweet Nothing” and Thomas Gold’s oft-used bootleg of “Million Voices” and “Apologize.” He polished off the set with “Spectrum,” and gratefully shouted to the crowd, “Thank you guys so much for being here so early!” 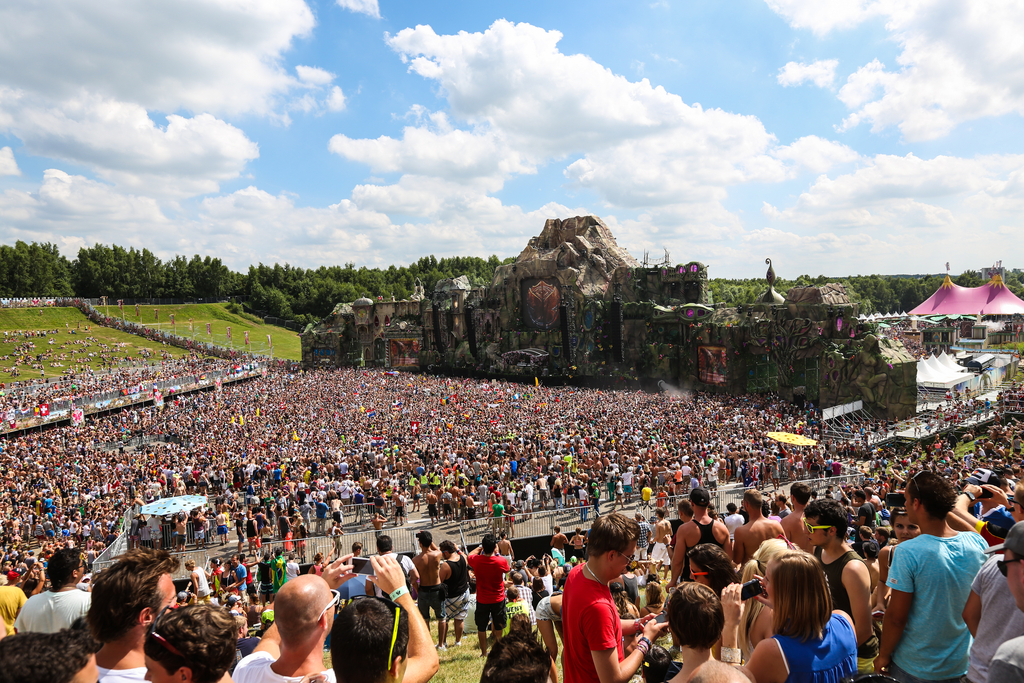 Coone took to the Q Dance stage (which is a scorpion, not a spider as previously reported) in the early afternoon to drop the hardstyle concoctions that got him signed to Steve Aoki’s Dim Mak in the States, for a crowd of the Dutch-born genre’s core fans. Most notable: Coone’s own track “Monstah,” which interpolates Nicki Minaj’s verse on Kanye West’s own “Monster,” yielding a predatory anthem for 150-plus-BPM ladies. 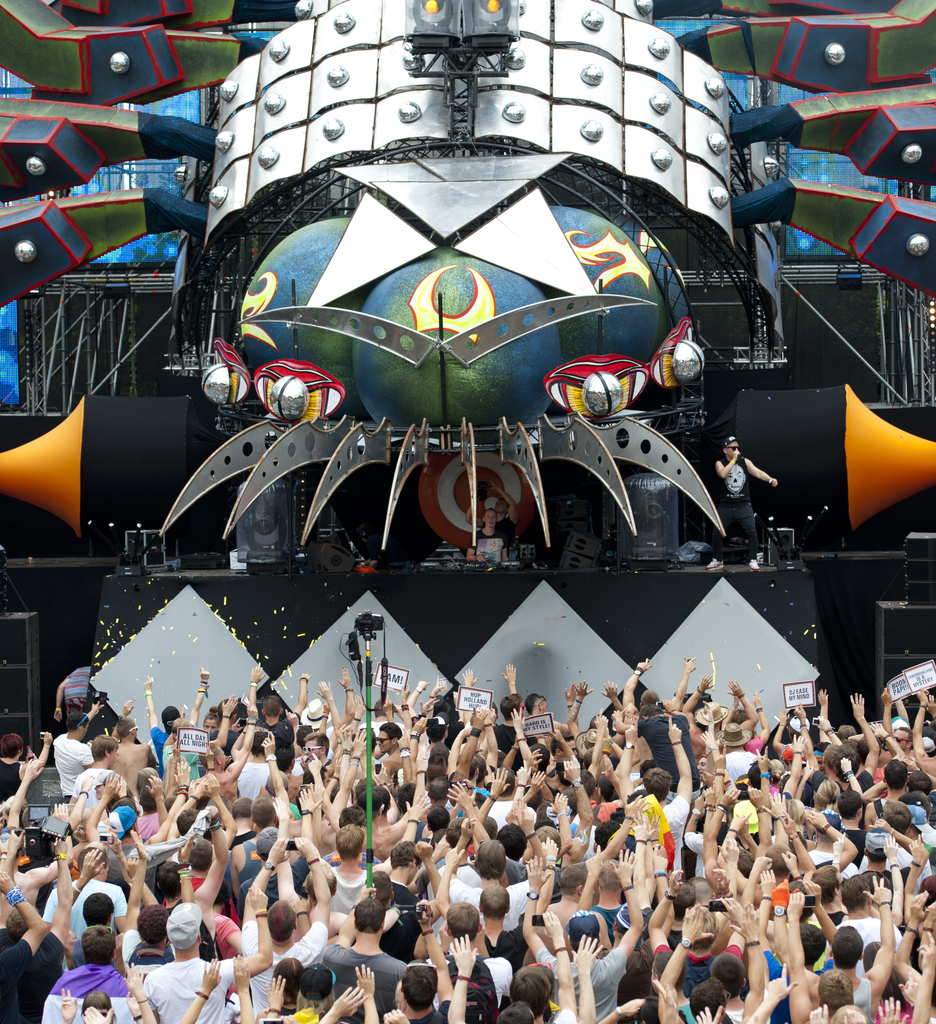 “IT’S HOT AS HELL IN THERE”

At the Full On Ferry Corsten Stage, Wardt van der Harst played solo under the W&W banner (Willem van Hanegem, the other half of the Dutch duo, has been sidelined with health issues this summer). But no matter: van der Harst delivered the intense, trance-meets-electro sound for which the group has become revered. He dropped W&W originals like “The Code,” “Invasion” and “Thunder” before being joined onstage by Ferry Corsten for a 15-minute back-to-back set. The tent was literally overflowing from all sides with fans trying to get a closer view; one fan trying to make his way towards the front was cautioned by a fellow festival-goer, “It’s hot as hell in there, but it’s incredible.” A pretty accurate summary, if you ask us. 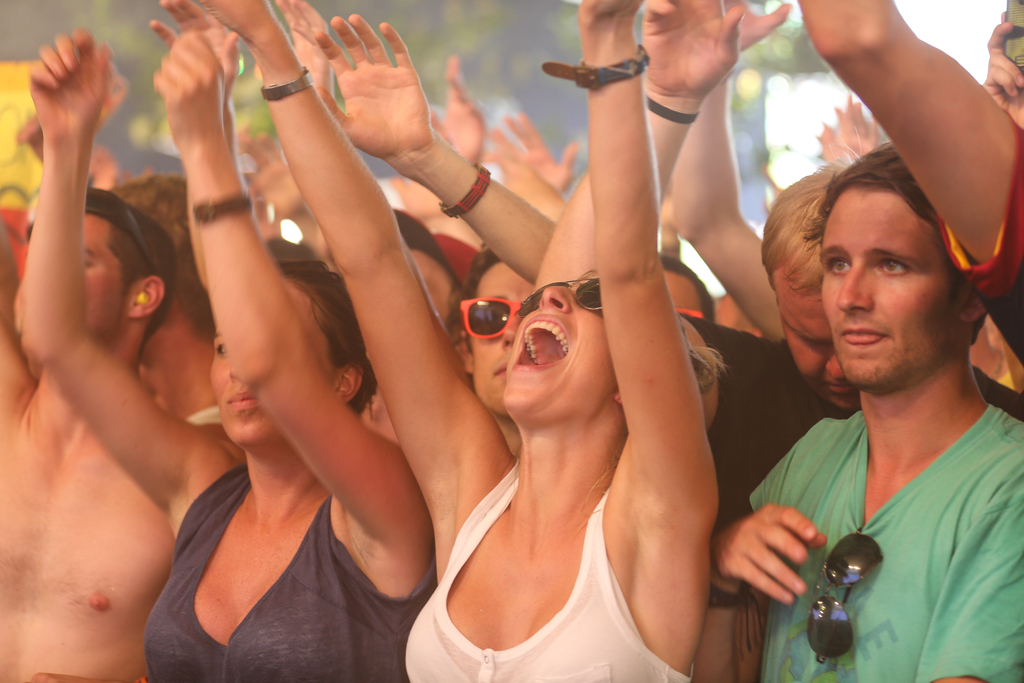 Legends Derrick Carter, Mark Farina and DJ Sneak took a blessedly long three-hour turn at a small stage near the walkway to the Main, which had oversized candy pieces hanging from its arch. Redefining the bro-out, the three DJs – plus drop-by Josh Wink, whom Carter greeted warmly, rumpling his curly hair – vibed off each other in the DJ booth, showing their lifelong friendship and musical kinship. The music was chunky and funky, the crowd slightly older and more chill, and the floor always full. 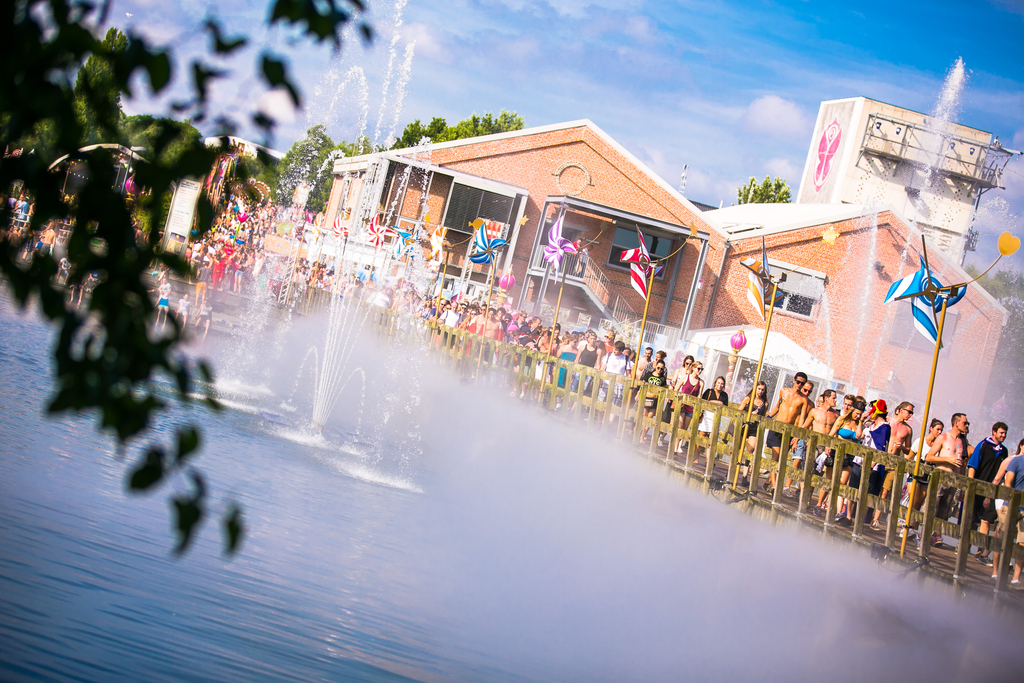 Solomun’s set on the open-air Ketaloco stage transformed a modest stretch of grass at the top of a small hill, not too far from the bombast of the Main Stage. With fake palm trees hanging overhead, the elevated stage was in full view of the glaring afternoon sun, giving it the feel of a sweaty daytime Ibiza terrace as Solomon dropped tunes on the funkier side of house, with just a few dashes of techno thrown in to toughen things up. 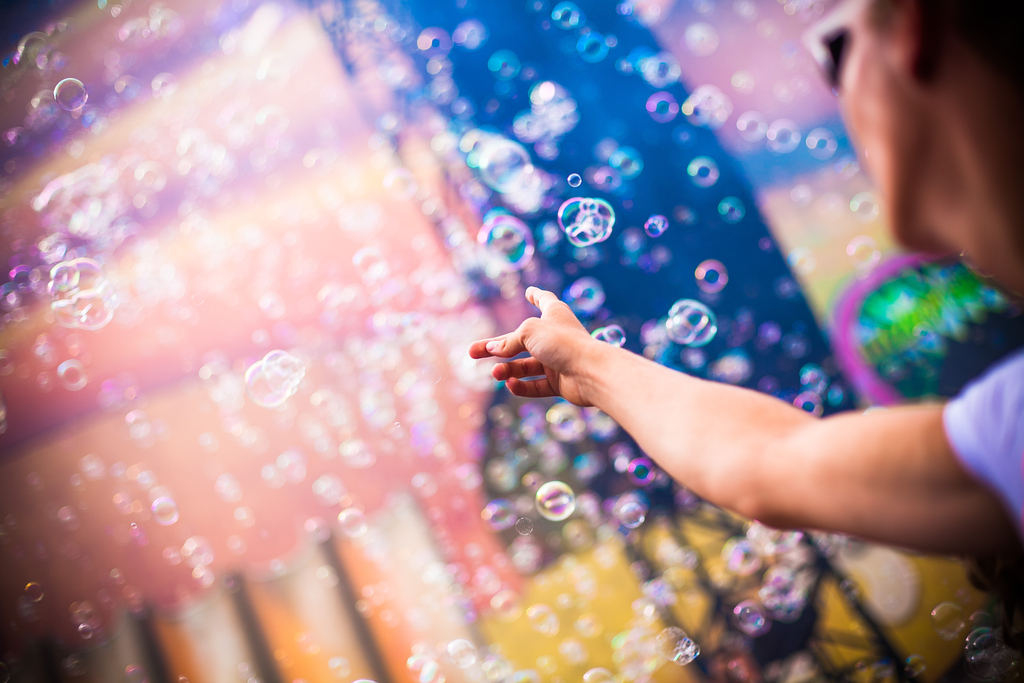 We were surprised when the three superheroes hit the decks at the Super You & Me stage. While it had been widely rumored that Laidback Luke’s Superman would be joined by Martin Solveig and Benny Benassi, both of whom had performed on the stage earlier, he instead played with Sander van Doorn (Ironman) and Dimitri Vegas (Ironman). The trio were musically unconstrained under their superhero guises, not just playing their hits but dropping surprise tracks that might not otherwise work at Tomorrowland. An unadulterated version of Queen’s “We Will Rock You stopped the show – in the best way possible. Fans enthusiastically chanted along, clapping with their arms high in the air. The performance finished with a nearly ten-minute long fireworks display, which was all the more dramatic as the explosions went off above the butterfly-shaped stage and Ferris wheel behind it.

Fireworks exploded over the Main Stage as Avicii employed one of his favorite set tricks: Dropping Pharaoahe Monch’s hip-hop standard “Simon Says” into the EDM track that samples it, Tujamo & Plastik Funk’s “Who.” While his set was not much different from his recent ones at Electric Daisy Carnival in Las Vegas and Ultra Europe, the crowd – easily the largest for any Main Stager thus far – lapped it up, even after the heavens opened. New tracks like “Addicted to You” and “Dear Boy” were familiar to the throng, even though they haven’t been officially released yet – speaking to the young artist’s incredible power. 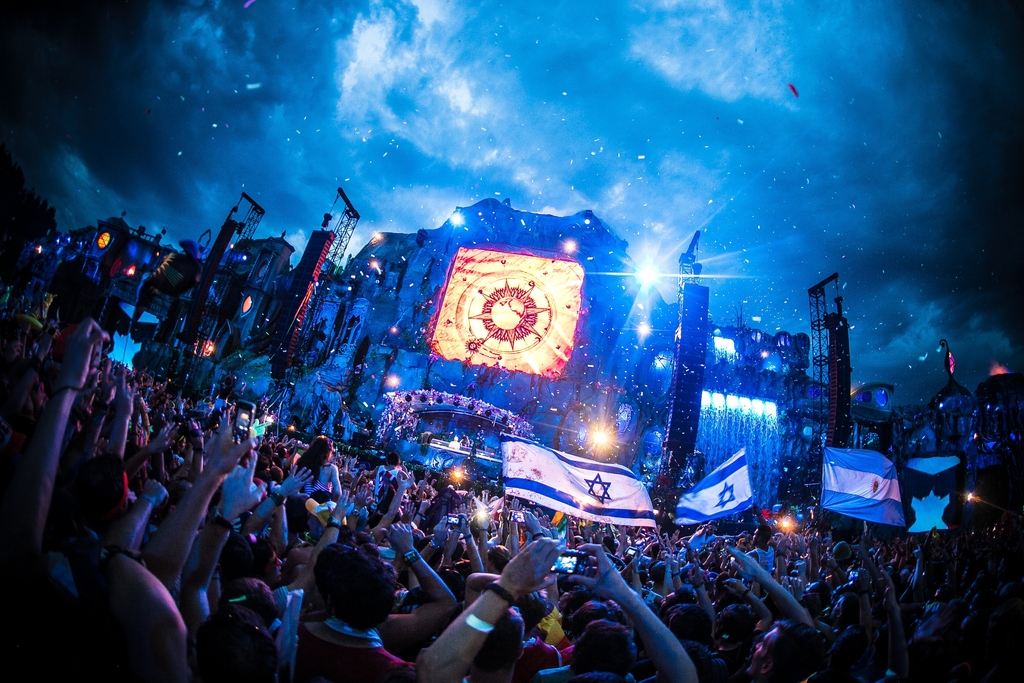 When the heavens opened at 11pm, there was a carnivalesque atmosphere under the canopy of the Cocoon Heroes stage, as Sven Vath hit the midpoint of his three-hour set. Easing into hard techno by this stage to match the hysteria of the weather, the wind blew sheets of rain under the canopy, soaking the dancefloor. “Fuck The Rain” scrolled across the screens defiantly in the Cocoon Heroes font. Despite the rave-at-any-cost attitude, however, the stage couldn’t hold out against the elements and was shut down before midnight. 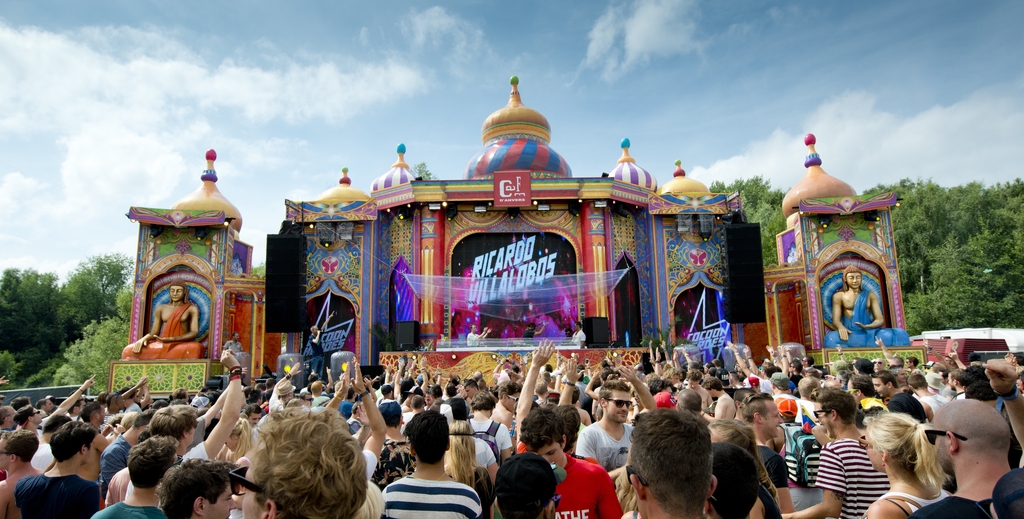 ID THIS, HE DARES YOU

As fans escaped the rain and found cover in the gorgeous Garden of Madness tent, Eric Prydz welcomed them with a set as dark as the weather. The mix was more Cirez D than Pryda, riding on heavy kicks and crisp snares rather than progressive basslines. He dropped tracks like the all-too-appropriate “Thunderstruck,” his bootleg of “On/Off” and Green Velvet & Harvard Bass’ “Laser Beams” and, as always, a handful of unreleased songs that had fans’ cameras and phones in the air. 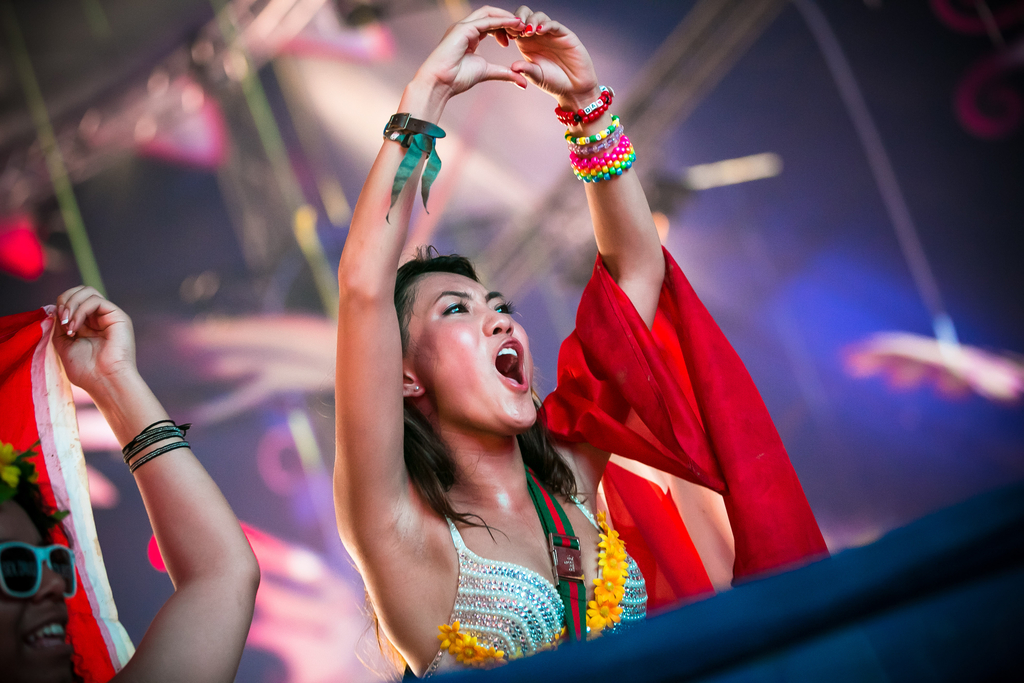 Into the hardest stretch of rain came Armin van Buuren, noticeably more effervescent than usual – which is saying a lot. It all became clear when he got on the mic to make an announcement: “I just came straight from the hospital. I want the world to welcome…my wife just gave birth to a son. So I want to dedicate my whole set to my new son.” He then dropped his own “Intense,” looking skyward with tears in his eyes. The word gets overused, but it was truly an epic moment.