Today is the 20th anniversary of Strawberry Fields, the wild, anarchic 1994 rave in a sugarcane field outside Brisbane that kickstarted the movement of massive Australian dance festivals we have today.

To celebrate its 20th anniversary, and the legacy it bequeathed to the Australian dance scene, inthemix writer and veteran dance fan Kris Swales spoke to the promoters and DJs involved to get an oral history of Queensland’s first major dance music festival, Strawberry Fields.

Peter Brown: Strawberry Fields promoter with ties to the Brisbane club scene dating back to the early to mid 1980s.

Jenny Juckel: AKA Jen-e, one of Brisbane’s most popular DJs through the ‘90s and early 2000s.

Jeff Polley: Scene Magazine photographer and author of Postcards from the Pits – The Dance Floor Edition.

Brisbane’s summer of love didn’t come when The Beatles and co. spread the psychedelic word across the planet in ‘67; nor did it match up with Britain’s acid house fuelled rave up of 1988 and beyond. But when the love did come it was no less momentous, giving a seemingly innocuous locale – the Strawberry Farm that sits just off the Pacific Highway in Pimpama, 48 kilometres south of the state capital – a countercultural subtext that few drivers doing the Gold Coast commute would know of.

Not that Queensland was entirely devoid of dancing activity between 1988 and Saturday 29 January, 1994: the night Strawberry Fields, named as much for Candyflip’s 1990 cover as The Beatles’ classic itself, raved its way into folklore. Indeed, just eight days earlier the Big Day Out and its brand new Boiler Room, then housed in a sauna-like shed instead of a tent, hosted around 15,000 fans on its Gold Coast debut. 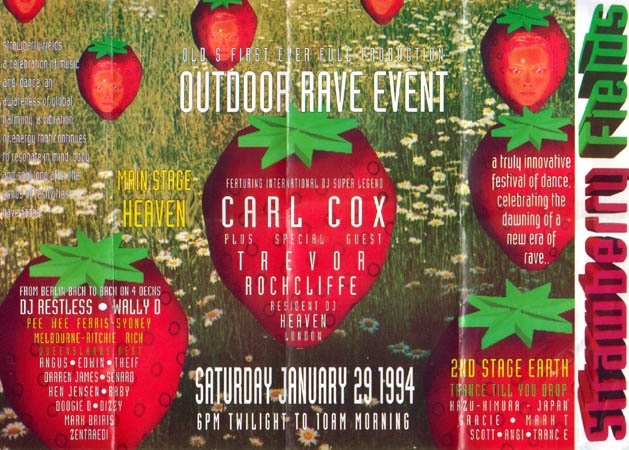 Michael Watt, a Brisbane scene mainstay to this day, from launching The Met in 2006 to his current post as director of Paper Street Agency, remembers Peewee Ferris bringing dance music to town even earlier. It was a wrap party for Brisbane’s unofficial coming of age party, Expo ‘88, when Watt was just a teenager with New Order’s Blue Monday on cassingle and no concrete career path ahead; his martial arts training led him to take on security work.

This was a Brisbane long before The Met and Family, The Zoo and Ric’s; only The Beat remains from those days, though it wasn’t the only show in town. “I started working the doors of the underground dance clubs, which is how I got on the door at Rhythm Zone,” says Watt. “That was run by Darren Briais and a couple of his friends. It was basically the beginning – a lot of the clubs that had been doing dance music in the Valley, or Brisbane in general, were very much gay clubs. Rhythm Zone for me was one of the first clubs for heteros and everyone alike where there was continual mixing.” 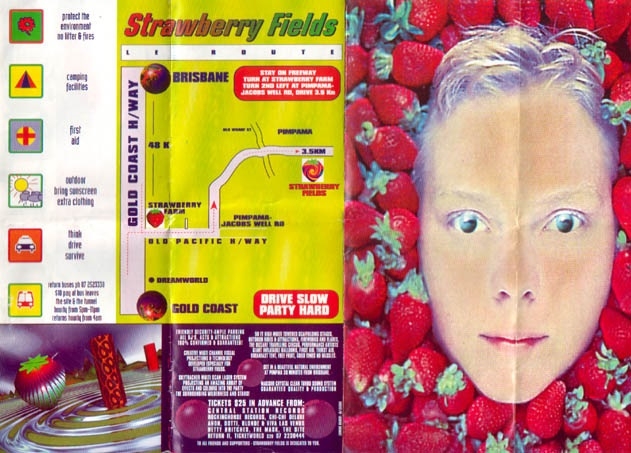 Acid house had finally arrived, though not everyone was enjoying their first taste of what they saw as “the same fucking song playing all night”. “I remember actually working on the door and having to explain that to people,” says Watt, “because some of them would want their money back when they went inside. They were flying back out the front door and I had to explain to them what it was.”

The sound did make an impression, though, and interstate DJs ultimately relished the chance of flying north, says Sydney’s Pee Wee Ferris. “There was more of an openness to new music, really. Nothing commercial, just new music and you could get away with it where a lot of places you couldn’t.”

By the early 1990s promoter Peter Brown was already nearing veteran status himself, having in the ‘80s run Marilyn’s Cocktail Bar, later Mannequins Party House, and opened fashion outlet The Mask where the Myer Centre now stands. “I’d had a few parties prior,” says Brown, who later worked on touring festivals such as Vibes on a Summer’s Day and Summafieldayze. “But the major launch I had was an Infinity dance party at The Site.” Watt and Brown’s paths first crossed when Watt was just out of school, though it wasn’t until 1993 that they both found themselves at the 3,200-capacity club space as Brisbane began to accelerate…