Last year, Stereosonic stepped up and expanded to a two-day event around the country, bringing “the greatest EDM line-up Australia has ever seen” with them. In 2014, Australia’s dance mega-festival is back for two days once more…and if you thought last year’s line-up was big, just wait until you see who they’ve got in store for us this summer.

At the top of the bill for the 2014 tour are some of the biggest names in dance music right now. On Day 1, hit-maker Calvin Harris and the original superstar DJ Tiesto are leading the charge. Then there’s Mad Decent head, Major Lazer ringleader and producer pro Diplo, a DJ set from Disclosure, Dutch legends W&W and the anticipated return of DJ Snake, the man behind the anthems Turn Down For What and Get Low.

And on Day 2? Stereosonic have secured the return of Skrillex, who was due to play the festival in 2013 before being forced to cancel. He’s joined by Sweden’s new heavyweight Alesso, king of the cake Steve Aoki, party-starters Showtek and more.

But it’s not just the headliners who are set to impress. Porter Robinson fans will be pleased to see the Kawaii king is headed back to our shores, and as the ’(Live)’ after his name assures, he’s bringing the full Worlds album tour with him. Then there’s I Got U craftsman Duke Dumont, mainstage pro Laidback Luke and the return of Destructo’s HARD Stage, with RL Grime back to boot.

The trance contingent is especially strong in 2014. As well as W&W, Stereo have locked in sets from perennial favourite Dash Berlin, plus Cosmic Gate, Orjan Nilsen and Andrew Rayel as well as the first-ever Australian appearance from New World Punx, the joint project of Markus Schulz and Ferry Corsten (and yes, both of them are playing solo too).

House is just as well represented. The legend that is Carl Cox will be Stereosonic’s special guest once more, joined by Nina Kraviz, Germans Booka Shade in all their live glory, remix gun MK, Berlin’s Tale of Us, veteran producer Kolsch and Hotflush boss Scuba, to cherrypick a few.

And then there’s crazy-good local line-up, spanning What So Not, Will Sparks, Joel Fletcher, Peking Duk, Alison Wonderland and more. We could go on – or you could scroll down and see it all for yourself. The Ticketmaster member presale starts on Wednesday July 30, with general public tickets on sale from Tuesday August 5. [Article image by Rukes,] 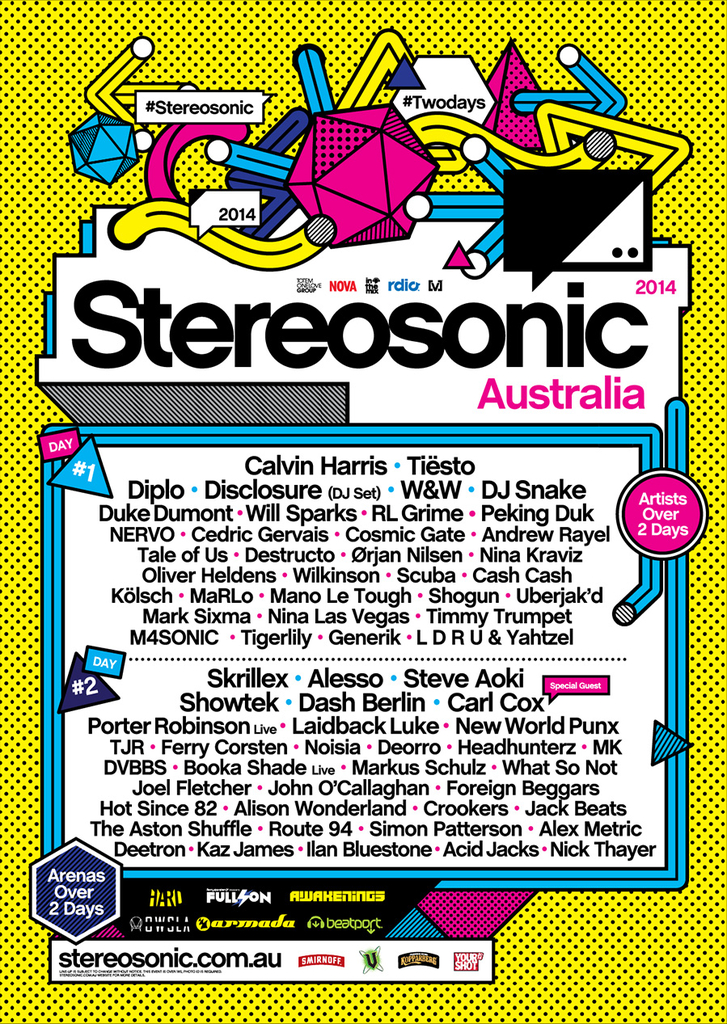