‘Never Wear Shoes’ and other secrets to DJ success

How do you stand out as a DJ in 2013? Is there a proven formula behind the biggest success stories in the game? Back in May, inthemix took a trip to Ibiza with 18 young DJ-producers for the burn Residency. Under the Mediterranean sun, this crew of hopefuls was schooled by some of their heroes. Ibiza drawcards like Fatboy Slim, Steve Lawler, Maceo Plex, Solomun and Avicii passed through to dispense some advice to their protégés. We had our recorder at the ready to bring you the golden rules from Fatboy Slim, Steve Lawler and Avicii – three renowned names with very different philosophies on making it in dance music.

Brighton veteran Norman Cook, aka Fatboy Slim, was the first of the DJ mentors to arrive, armed with a handwritten list of his golden rules. He also has a compelling story to tell about managing the excesses of DJ life. Here’s what he’s learned over an illustrious DJ career.

“Always make sure you’re having 20-percent more fun than your crowd. You have to lead by example. It’s one of the basic rules of DJing. It’s ironic me saying this, because I actually gave up drinking three years ago. But for the majority of my DJ career, I felt that I had to be very much ‘in the party’.

“It’s not just about sitting in your bedroom and doing this really clever mix. It’s also about entertaining people.”

This is probably the most important one. The only perceived wisdom that that I can give from my own personal experience, is that mixing skills are secondary to your personality, the music you play, and how you play it. Highly technical DJs like Carl Cox are still always looking out at the audience. At the end of the day, you’re there to have a connection with the crowd, and to share a common experience through the music. You’ve got to make them think that you’re their friend, and vice versa.

And there is a certain look you get [from the dancefloor] that says, Yeah, I’m really enjoying this. Otherwise you might get a look that says, ‘What the fuck are you doing?’ It’s not just about sitting in your bedroom and doing this really clever mix, it’s also about entertaining people. It’s not such a difficult principle to latch onto.

I believe at the heart of dance music there’s a constant, which is to provide the soundtrack for young people going out and escaping. It’s a common celebration. Though the noises might change slightly, the reason why we do this doesn’t change. The politics don’t shift from the left to the right.” 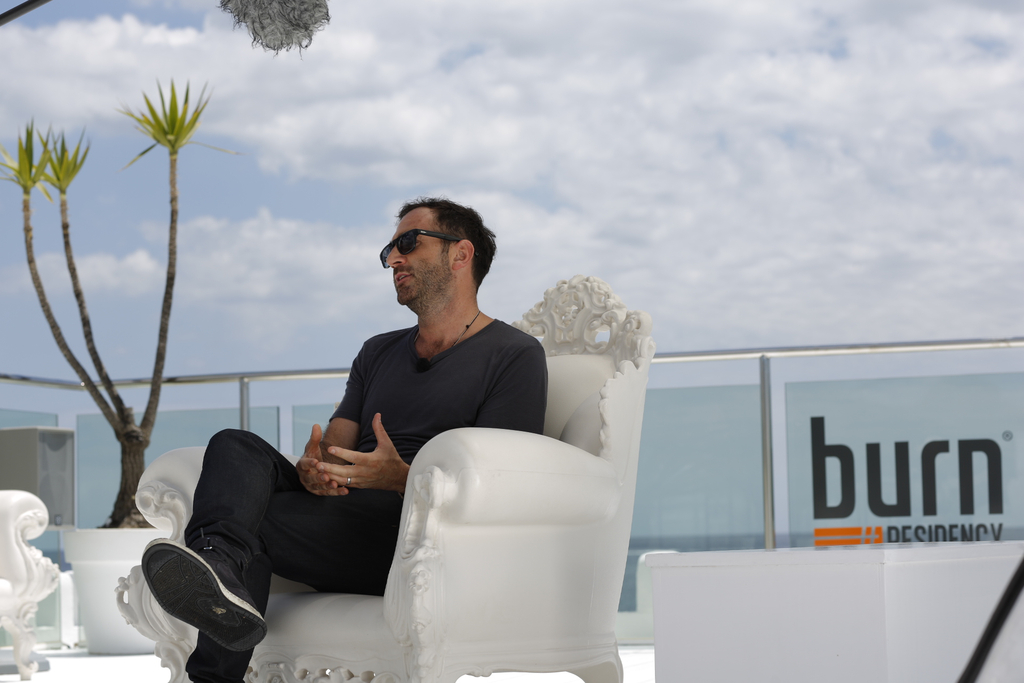 A stalwart fixture in Ibiza over the past decade, trading a long-running residency at Space for his own hugely successful night at Sankeys, Steve Lawler is a different breed of veteran from Fatboy Slim. Getting his break via a residency at the island’s seminal Café Mambo, his advice focused on building your identity as an artist.

“I first came out here to Ibiza on holiday, and brought my records with me. I came and played just once, and the owner instantly offered me a residency. So that’s kind of how it happened, it was very organic and natural. But the good thing about those days was that Mambo was the place the whole industry would go, and I was playing in front of a lot of my peers – promoters, journos, whatever. I wasn’t fully aware of it at the time, but it really honed my craft as a DJ.

Playing for that long, you really begin to understand your music, and your position as a DJ. You’re providing people’s soundtrack, and it’s not just about what you might personally want to do. You need to look at who you’re playing to, and give people the best soundtrack for what they’re currently doing.

So during the day it was trip-hop, downbeat, Balearic kind of music. As it moved towards sunset it would be ambient, and as it got to nightfall it would be deep house. I structured my DJing to make people’s experiences better, and that’s ultimately what a DJ is. You’re giving people an experience, and making their night better than what it could’ve been.

“When a sound becomes trendy, everyone starts producing it. Nothing really comes of the copycats.”

If you really want to be on a DJ’s record label, go to their gigs, try and get friendly with their crew. And then give them a demo. I guarantee it’ll be more likely to work than if you’re just sending an email. If you look at the whole Hot Creations phenomenon, all of the people on the label are Jamie Jones’ friends. It’s no big secret. Jamie has nurtured the music within his friendship circle, and it’s a very tight family. If you want to be a part of something, you need to just be out there. You need to live and breathe this business.

I’ve seen pretenders come along, trying to be the next Visionquest or Cocoon; and it never works, because it’s transparent. When a sound becomes trendy, absolutely everyone starts producing it, but only the first few people who started making it are the ones who stick it out. The ones who follow, nothing really comes of it, as they’re just copycats.

Make your own family, your own sound. It’s more important, and will get you noticed quicker. That’s what I did with Viva, I thought if I sign music that I like, then I’ll be able to play it. It’s your statement. It’s effectively your business card. But if you want to make money, I wouldn’t recommend starting a record label.”

23-year-old mainstage phenomenon Avicii has loomed large in Ibiza this season with a residency at the open-air Ushuaïa Beach Club. As comfortable as he is with the bombast of big-room DJing, the Swede brought a measured, soft-spoken presence to the DJ boot-camp. With a career that’s only just beginning, he stressed the need to “find your own sound”.

“When you produce for a longer amount of time, you find the sounds that you like, and the ways of shaping sounds that you like. With me personally, it’s always been about melodies, and that’s been my signature. Even throughout my new album, which includes a lot of acoustic elements and stuff like that, my sense of melody is still consistent. It still has that ‘Avicii-esque’ sound.

“Realise you have to pace yourself. Pick and choose your battles, and never forget it’s an actual job.”

You just need to produce more, and more, and more…because you need to find your own sound. You need to think outside of the box, but in order to do that you need to first master the craft of producing, to a certain extent. I started out trying to copy other producers that I liked, trying to emulate their style, and what they had accomplished. And once I’d done that, once I was on that road, I made other discoveries and developed my own sound out of that.

In the beginning, I was partying a lot more than I am now. When the schedule gets busier, you have to adapt more and more to it, and keep things easy; realise you have to pace yourself. Pick and choose your battles, and never forget it’s an actual job. In order to travel that much, you really have to take care of yourself, that’s something I’ve learned over the past year.”