Avicii debuts “True” tracks for an invite-only crowd in NYC

New York – Billed as an album listening party, last night’s (July 17) invite-only Avicii shindig at New York’s swanky Standard Hotel only played-back seven tracks off the artist’s hotly anticipated debut True, many of which are already out in the world thanks to the artist’s promo mix, released in April.

Still, a packed crowd of major label heavy-hitters (like Island Records brass David Massey and Steve Bartels), dance music press, and good-looking hangers-on (including the model featured in the “Wake Me Up” video) crowded the Standard’s third floor lounge, looking to get close to the artist who’s slated to have even more “Levels”-level hits with True. Avicii himself turned up just as the sun was starting to set, and was immediately mobbed by well-wishers (including Massey, here on the left). 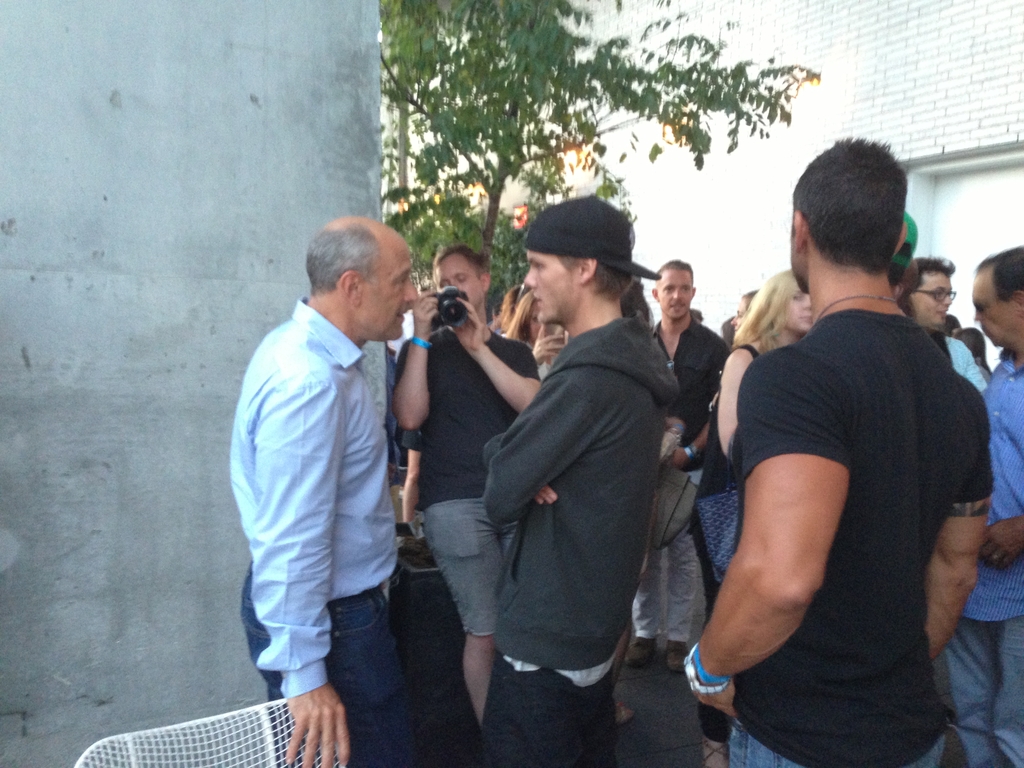 Bartels welcomed everyone to the event before showing a hype video touting Avicii’s laundry list of career accomplishments played on a screen at the front of the room. Tim then took the microphone for a brief conversation with Massey about the process of recording True (“It was really natural,” he said), before the video premiere of the album’s lead single “Wake Me Up.”

Featuring a beautiful woman and her young daughter (dressed head to toe in Ralph Lauren Denim & Supply – we saw the tags), the video chronicled their struggle to escape a humdrum town (potentially in the Old West?) filled with far less beautiful people who were persecuting them. Frustrated, the model eventually rides a horse to a place with other good-looking people who have the same Avicii logo tattoo that she does. They take her to what we understand to be Ultra Music Festival (that Main Stage is unmistakable), where Avicii just happens to be playing with “Wake” vocalist Aloe Blacc (in actual UMF performance footage). She wilds out and fricking loves it. She then rides the horse back to pick up her daughter, who is sleeping in bed (reckless endangerment, no?), and take her to the magical land of Ultra, where they will finally be understood and accepted. It was as bizarre as it sounds.

Finally the big moment came when the album playback began – well, sort of. The seven-track selection started with Avicii’s latest collaboration with Salem Al Fakir, “All My Life (Someone Like You),” a possible second single with a strong topline and the usual uplifting melodies and chord progressions. That was followed up with the so-called “country house” production “Hey Brother Hey Sister” (working title), and “Addicted To You.” The latter track features vocals from Audra Mae and is arguably one of the strongest we’ve heard thus far; it would make an excellent follow-up single to “Wake.” Finally we heard a new funky, disco-style track that could be called “Liar Liar,” followed by more music that has yet to be identified. The preview ended fittingly with the “Heart Upon My Sleeve” ID.

We’ve heard mixed things on how many tracks are on the final album, from nine, to 13 or 14. The seven played at the event certainly represent a new direction for Tim Bergling, but we’re now even more curious to hear the LP in its entirety. Hopefully we’ll get the chance before the official release September 17, but until then, we’ll be listening to “Addicted To You” rips on YouTube.