New York – TJR has done that thing that kills your vibe, makes you question God, and ruins your pants. He has sat in gum.

“Aww, man. Anybody got any peanut butter? That’s how this works, right?”

The DJ/producer was in the Green Room at Governors Island this past Saturday (July 20), just after wrapping his opening set for chainsaw king R3hab for a teeming crowd. The event opened its gates at four p.m., but the fashionably late ravers attempting to board the ferry after eight were met with a harsh reality: the island was at capacity. All ferries were halted. “You’re not getting in. Go home,” a woman working security told angry fans squeezing against a barricade near the dock. 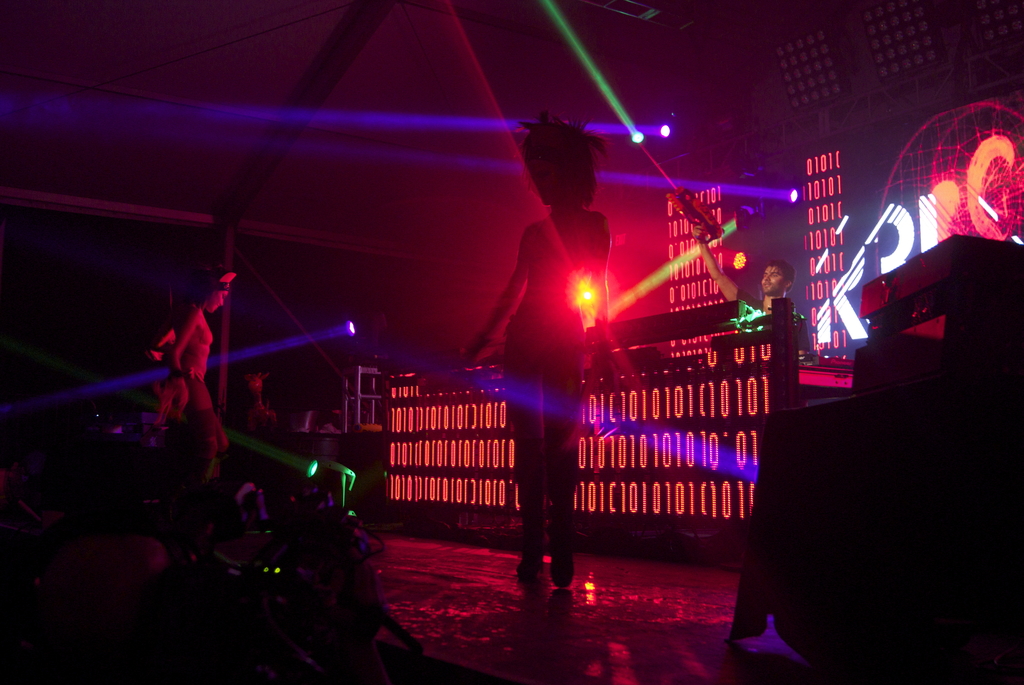 He might have gotten big behind that most hated dance music trope – a Pitbull song – but TJR (real name T.J. Rozdilsky) doesn’t resemble your average DJ. He’s lanky, totally bald, and wears a full salt-and-pepper beard that, combined with his long, angular nose and heavy brow, makes him seem vaguely Eastern European. (He’s actually from Connecticut.) And the chill dude wouldn’t let a little Orbit on the trousers take him out of orbit tonight. He just played to a more-than-sold-out crowd that welcomed him warmly. And even better than that, the sound guy thinks he’s awesome.

“It’s always good to see somebody perform who really knows how to DJ,” the tech proclaimed loudly in the backstage area. “You know, someone who actually appreciates the craft of it, who can scratch, who can juggle. He does it all.”

TJR is still best known for the flak he took last year when his No. 1 Beatport house hit “Funky Vodka” was bought by Pitbull for the beat of “Don’t Stop The Party,” which is virtually the same song except with a few clunky rap verses thrown on top. Of course, it achieved much greater commercial success than the original.

“People are like, ‘You ruined ‘Funky Vodka.’ And I’m like, ‘Dude, I still play ‘Funky Vodka,’” TJR laughs. “If you don’t like [‘Don’t Stop The Party’], play ‘Funky Vodka.’ I understand where those people come from. But the way I look at it, they’re two different worlds. The typical Pitbull fan, probably like a 15-year-old girl in Middle America, has no idea about dance music. She would never understand about ‘Funky Vodka.’ So he brought it to those markets. At the end of the day, I’m okay with it.”

Now the artist is ready to take the next step, one based on more production, of both the pop and dance varieties, and his considerable DJ skills – praised by folks other than tonight’s soundman, including Tommie Sunshine (“You, sir are the legend and my new favorite DJ,” he tweeted back in January after hearing TJR spin).

“I’m not trying to be a David Guetta-esque guy, but [Pitbull] opened doors,” he says. “I’ve made other tracks for other mainstream acts. We’re all trying to live, right? I look at that as my retirement side. I’m gonna make quality dance music for these mainstream guys, but it’s not gonna be ‘featuring TJR.’ It’s total production credits. And the ‘Ode To Oi’s,’ the ‘What’s Up Suckaz,’ all those, that’s still, to me, who I am. That’s the music I’m gonna DJ.”

At Governors, TJR had a proper palette to work with: Impressively for a single-stage event, the waterfront tent boasted myriad dancers, fog machines and epileptic visual effects, rivaling and perhaps even surpassing much larger NYC festivals.

As R3hab was finishing up, TJR was told by an aide that he needed to make his way to Pacha in midtown to perform for the afterparty. He turned toward us.

But of course. In the cramped, hectic space at Pacha, TJR played for a capacity crowd mostly made up of those still coming down from the highs of Governors Island. Even seeing it a second time, his set managed to induce awe. It isn’t so much the music TJR spins that makes him such an endearing act, it’s the fun he seems to have doing it. Several times, fans in front of the stage handed up props – a set of light-up glasses, an inflatable giraffe, some rave kandi – which he gleefully accepted and brandished to varying effects. The smile on his face was infectious.

He also seemed consummately aware that he was leading up to the set of his fellow DJ R3hab, who tends to lean more on aggressive, hard-hitting electro house and trap. TJR’s fun, bouncy tracks, such as his remix of Krewella’s “Alive” and his original “Ode To Oi,” proved the perfect appetizer to R3hab’s more demanding main dish, which lasted the crowd deep into the early morning. And while R3hab’s set was long and brutal, TJR left such an impression that his smile practically hung in the air above the decks. You couldn’t ask more for an opener. When the club died down, it was light out. For a good portion of NYC’s EDM fans, Sunday morning (or, more likely, afternoon) must have been a painful one. But they would almost certainly say it was worth it.