72 hours lost in the doof: The Rainbow Serpent Survival Guide

“My days have become nights have become days,” says Tim, 42 hours after the first official beats started rolling at Rainbow Serpent 2014. His shirt is discarded, replaced with a light cotton shawl loosely wrapped around his shoulders, a synthetic fedora with a Smiley face button shading his three-day growth, and Spacetribe pants covering legs that won’t stop bouncing. A young woman in impossibly short denim shorts and bikini top bends and twists nearby, her torso snapping side-to-side at 90 degree angles to her abdomen as her left knee lifts and right leg pushes her entire body skywards with the force of a high-jumper.

There are smatterings of people on the Main Stage dancefloor as the 10am Sunday sun peeks through the multi-coloured shade cloth spread sparsely above. A light mist rains down from the sprinkler system, dust kicking up from a thousand feet in return. Dreadlocks dance next to polo shirts; bandana-covered faces next to Native American headdress; sandals next to sandshoes next to feet that haven’t seen footwear in days. Four police stand at the edge of the sand as the natural amphitheatre begins to slope up, indulging the odd merrymaker in conversation but otherwise letting the scene unfold.

Kularis is on stage, mixing one off-beat psytrance bassline into the next with minimal fuss and occasional pantomime. “This island is the beginning of human achievement,” he seems to mime along, as the next kick drum onslaught arrives. You’re off the grid amidst rolling hills in rural Victoria and the proposition doesn’t seem entirely implausible.

Going to Rainbow Serpent is a lot like overseas travel – it doesn’t feel real until you pass through the gates to what comes next. We’ve got Michael Mayer’s Fabric 13 as the soundtrack while we drive west past Ballarat, through dry yellow fields and hills occasionally dotted with wind farms, before turning right at Beaufort on the final stretch. Over a rise and cars appear in a field in the distance. We turn into a road spitting dust into the sky, past a series of hand-painted signs setting the ground rules. “No Gas Bottles. No Animals. No Glass. No Fires. No Point Arguing.”

We’re ushered into the grounds past a battered white Kingswood wagon which has picked the wrong time to finally drop its clutch, heading to the north camping grounds in search of our totem – the Crackie Monster. 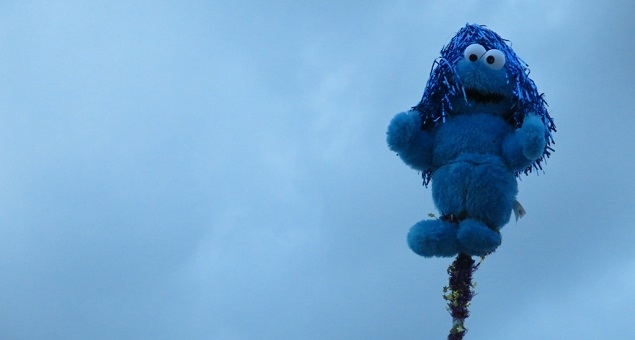 He’s tiny but easy to spot amidst the usual campground fare – the skull and crossbones, rainbow flags, the ubiquitous Britz camper van. Our site is not so much a pocket as its own loosely connected village, several degrees of separation linking these regular Rainbow families; Max – the Mayor-elect of Crackie town – rustles up the troops for a recce. There are whispers of a pre-party at Bean Bag Babylon, a Rainbow fixture which this year is the jewel in the south campground’s Theme Camps crown. The Crackie totem is removed from its perch and leads the tribe past the Market Stage, where the LED tubes hanging above its dancefloor give a brief tease of the cascading waterfalls of light they’ll be showering the floor with from 4pm tomorrow. The intimidating array of Funktion-One speakers currently sit at peace, but set to stun.

Nestled at the base of a natural amphitheatre, the Main Stage is still 46 hours from launch but the battle station is nearing completion, as is the understudy Sunset Stage, boasting a set-up that could’ve come from the imagination of Dr Seuss. A bike rider sits under a spotlight at Sunset, mesmerised by several thousand swarming insects that have been inexorably drawn towards its light. The usual campground sounds (the tik-tik-tik of hammer on tent peg) mix with the not so usual (for instance, the Solomun remix of Let’s Go Dancing) as a gentle throb rolls in from the south.

Bean Bag Babylon rises like a miniature version of Tina Turner’s battleground in Beyond Thunderdome: a honeycomb structure inside which four JBL speakers point at an intimate dancefloor covered in Middle Eastern carpets and already shoulder-to-shoulder. Uone is at the controls, delivering 110bpm house with basslines slung deep, low and long. It’s 10pm on the night before Rainbow and you can already sense the irresistible pull that lures people back year after year, like insects towards the light.

Max motions towards the bar. “Three words,” he says. “Free fuckin’ beer, on tap.” It’s home brew and the kegs are un-gassed and you’re shit out of luck if you didn’t BYO cup. The tempo slowly accelerates, the basslines shifting from chuggy to rolling sine waves. Punters are now standing five, ten deep around Bean Bag Babylon, the side flaps peeled back so the sound can escape. The clock is on the wrong side of 1am. Commonsense prevails.